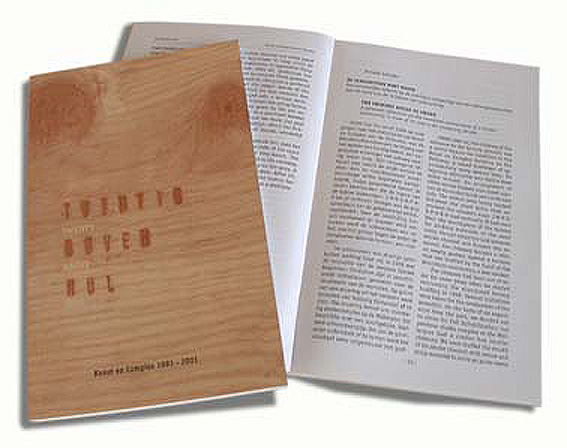 THE CHIMNEY NEEDS TO SMOKE

A personal reflection on the twentieth anniversary of a studio community in view of its means for producing smoke.

FROM 1989 on, the chimney at the entrance to the factory grounds was a useful beacon for travellers to the Kunst en Complex building on the Keileweg. A raised forefinger of approximately forty meters long. Its tapering silhouette was visible from miles around. An arrangement of white stones formed man-sized capitals at its eroded brick-red north east side. The letters were losely tracked between the steel belts that restrained the column's mass. I-N-V-E-R-P-A-K it read vertically. It had once been the mouthpiece of the factory for packing materials of the same name, though when the link between smoke channel and furnace was removed, the chimney became a relic, an empty gesture against a horizon that was levelled by the hand of the demolition contractors, a non-smoker.

The chimney had been out of order for some years when we started renovating the abandoned factory building in 1988. Several initiatives were taken for the revaluation of the monolith. On the basis of an experience from the past, we decided not to strive for Full Rehabilitation; our previous studio complex at the Müllerpier had a similar but smaller chimney. We once stuffed the mouth of its smoke channel with refuse and scrap material to solve an acute waste problem. A dash of gasoline and a match made the combustion process irreversible. From the column's tip, a caterpillar of lead-gray smoke was pumped into the azure. It was impossible to extinguish the blaze. Upset, the Port Authority's police intervened because a dense smoke screen obstructed the view of the ships on the Nieuwe Maas river.

A 'careful' step towards reusing the chimney was made in 1990 by a KenC-member who upgraded it into a one-legged camera stand. To provide an overall picture of the studio complex, he climbed the series of rusty rungs twice in a row. The first time he arrived at the conclusion that the range of his camera was not wide enough for a long shot. The second time, he gave it another try with his wide angle lens.

Another plan dates back to 1995 when the adjacent street prostitution zone was officially opened. As part of a larger project, we proposed to use the chimney as a launching facility for the opening fireworks. A pink spotlight at the bottom of its shaft would illuminate the rising smoke from beneath. The inscription of the factory's former name INVERPAK would be changed into the more appropriate word INTERPIK (interprick) by substituting two letters. The project was cancelled because of lack of political support.

Meanwhile, the pylon made itself useful in a less spectacular way. Its pedestal hosted a black rabbit for a considerable time. One day the animal decided to swap its draughty hole at a vacant lot opposite for the sooty vault at the mouth of the chimney's flue. The eviction order was received on the morning when the first rubble came crashing down the shaft.

Higher levels had already provided strong evidence of the decline of our logo. The bolts of its steel belts rusted away and cracked. A heavy metal strip folded itself over the Foundations' gate after a free fall of about thirty meters, just missing a parked car. The chimney transformed from an upright gesture into a downright danger. The spontaneous descent of steel was the decisive factor for the local authorities to issue a demolition permit.

One bright spring morning in 1996, a van and a crane-loaded truck from demolition contractor Van der Linde drove up the Keileweg. The convoy pulled over at the foot of the chimney. A steel cage filled with personnel was hooked up to the tackle and lifted to the top of the pipe. A long hose supplied the compressed air. A helmeted figure placed his pneumatic chisel at the joints of the upper brickwork. Enclosed by a cloud of grit, he crushed the stone circle in a downward spiral. The smoke channel changed into a chute. After a month, the struggle for the longest breath was won by the compressor. That's how a remarkable dot was wiped off the map of the New Mathenesse district.

The base on which the pipe once rested is now paved. Trailers are parked, children swing here. Now and then a barbecue smokes. So in a sense the tradition is maintained on a smaller scale. Except for an incidental whirlwind that draws up dry leaves into a spinning column, there's nothing which reminds us of the mighty updraft of the structure that once towered here.

Future wayfarers to the KenC-building are kindly requested to orient themselves on the 125 meter measuring chimney of the nearby Galilei Street powerplant.

Meanwhile, the heavy smoking continued in the vicinity, especially at seats of fire without proper exhaust systems. To the north, greedy flames ate their way through Van Berkel's scale factory. To the east, a conflagration in Berco Bulk's warehouse got under control at the very last moment. To the south of us, a chemical inferno at Container Master International reduced its stores to ashes. And recently, a black cloud against the western sky pointed out that there was something wrong in a furniture depot close by. We, located at point zero of the co-ordinate system, sounded the alarm, watched well heated. Each time, our building was saved because of the favourable wind direction.

As part of the port's reorganisation, high risk industries were banned to the outskirts of the city. Almost all the new warehouses around the Keilehaven are reserved for the storage or transfer of fruit. Hardly inflammable goods (have you ever seen a banana catch fire?). We wouldn't have to count on additional external heat sources in the near future. Our attention was diverted to interior matters.

From the beginning of autumn to the end of spring the falling temperature and rising humidity level inside the complex call for an efficient heating policy (thermocratorship). In order to meet the individual needs of the users, the thermic management was decentralized. The typical communal brick chimney was relieved by a comprehensive system of thin walled metal stove-pipes. All around silver tubes extended from the building like the sprouts of a plant that force their way up through window panes and bitumen covered roofs. The galvanized tubes last up to three heating seasons. Slowly, they melt away from the acid breath produced by the multi-burners.

At irregular intervals KenC-members gear up like cat burglars to replace parts of the respiratory system.

In 1995, a cold wind appeared to rise over the KenC-community. Outside sources whispered of the inflation of the term 'studio community'. In the meantime, the idiom of the alternative circuit had been extended with more solid terms like 'artist collective' and 'artist initiative'. Because of the status related financial prospects, doubt was raised about the foundation's position.

The motive for the rise of the studio community (SC) was the acute need for studio spaces. The artist collective (AC) developed because of a desire for a collective exhibition policy. Both organisations acted more or less out of self-interest. The artist initiative (AI), on the other hand, is a cooperation of artists that run their own venue. Artist initiatives distinguish themselves by creating a platform for the presentation of 'outside' artists.

Was KenC an SC, an AC or an AI? Domestic consultation provided an answer of diplomatic elegance: Kunst en Complex is a mix of all three. The foundation is a collective of artists hosted in a studio community which counts as many initiatives as there are artists. Relieved, the foundation signed up for membership in the Union of Artist Initiatives. The meter inspector can deduce the number of initiatives in the building by the number of smoking stove-pipes.

The twenty-four studio spaces of the permanent members are kept in a workable temperature by a colourful army of stoves. They live on wood, oil or coal. Some speak by means of a grey plume, others by a sweltering haze. Who taught them how to speak? Who brings them to life? Who handles the woodblock, petrol can or briquette? And, finally, how can the intricate trade of heating within these factory walls be reflected? The question for the right framing occurred. Inspired by the proverb 'A dog reflects its owner', we decided to represent each heater by a picture of his or her means for producing smoke. We chose a manageable optic for the fieldwork: the view finder of a reflex camera. Its tilted single eye enframes your view behind the scenes of the opposition against the local thermic regime. For a while the smoke screen was lifted. I invite you to button up your coat and enter the Thermo-dynamic photogallery.