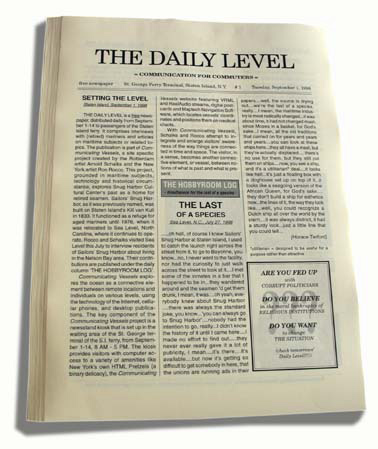 THE DAILY LEVEL is a free newspaper, distributed daily from September 1-14 to passengers of the Staten Island ferry. It comprises interviews with (retired) mariners and articles on maritime subjects or related topics. The publication is part of Communicating Vessels, a site specific project created by the Rotterdam artist Arnold Schalks and the New York artist Ron Rocco. This project, grounded in maritime subjects, technology and historical circumstance, explores Snug Harbor Cultural Center's past as a home for retired seamen. Sailors' Snug Harbor, as it was previously named, was built on Staten Island's Kill van Kull in 1833. It functioned as a refuge for aged mariners until 1976, when it was relocated to Sea Level, North Carolina, where it continues to operate. Rocco and Schalks visited Sea Level this July to interview residents of Sailors' Snug Harbor about living in the Nelson Bay area. Their contributions are published under the daily column 'THE HOBBYROOM LOG'.

“What was tangible were the contacts with the sailors. Ron and I flew to North Carolina for a visit to the residents of Sailor’s Snug Harbor at Sea Level, which we finished on July 31, 1998. Dear and memorable are the recollections of the sailors we met during our research in Sailors’ Snug Harbor at Sea Level. They represented a unique type of species: all examples of the principal non-social, pure individualist, combining an indestructible desire for liberty with a good measure of suspicion. The residents of the Harbor had and took the time to sound us out before stepping into contact; but once confidence was gained, there were no limits. In this hermetic circle of storytellers there appeared to be such an urgent need of ‘fresh ears’, that Ron and I were forced to split our team and make separate visits to the men’s rooms. When permission was granted, the tape recorder registered the conversations. Log books, photo-albums, nautical charts and letters were drawn from drawers or dug up from under beds to illustrate a turbulent life at sea; sleeves were rolled up to reveal tattoos or scars; snapshots of port darlings and inside information about divorce-procedures were shared without reserve. We developed a deep respect for the erudition and the mental resilience of these headstrong seniors. Some lost the thread in the heat of their discourse. After three days we faced the almost impossible task to make a coherent selection of the information that was confided to us.”

Communicating Vessels explores the ocean as a connective element between remote locations and individuals on various levels, using the technology of the Internet, cellular phones, and desktop publications. The key component of the Communicating Vessels project is a newsstand kiosk that is set up in the waiting area of the St. George terminal of the S.I. ferry, from September 1-14, 8 AM - 5 PM. Arnold reflected on the project at the St. George Terminal of the Staten Island Ferry when he stated:

"No less enjoyable and touching was our contact with the New York City public. At the kiosk we constructed, we offered an alternative to the 7-Eleven store or the Donut Shop. As such it became the hub for conversation, or a place to ‘chill’ for a few minutes. Unforgettable are the memories of the daily, multi-coloured current of commuters, that passed me on its way to embarkation on the Staten Island Ferries. The contact was often reduced to a glimpse or a approving nod on receiving a copy of the Daily Level. Sometimes, the bustle to get onto the boat offered room for a short exchange of thoughts about the project or yesterday’s articles. There were regulars: daily unhurried visitors, who decided to keep me company at the kiosk. Their disarming open-heartedness and uniqueness touched me: Irv, an unshaven jobless academic with a grade in artificial intelligence, who wanted me to explain over and over again how Ron and I connected time and space and, while listening, blew bubbles through the straw in his milkshake; Bob, a retired captain, who once had to pick up 2.000 dead US soldiers in Danang, where a Chinese officer accidentally hoisted the American flag upside down and panic broke out; the early pastor who compared all physical processes with osmosis, but wasn’t able to explain how that worked after all; the black granddad who switched off the life systems of his wife, dying of a brain tumor, in the presence of the entire family; the hobo who was never unwilling to repeat his agitated argument about how Khadaffi kept the world in his hold, etc … In the slaughterhouse acoustic of the tiled terminal, loud requests for conversion to Christianity were frequently heard, other voices tried to gain voters for a new District Attorney. The officers of the Staten Island Police Room had time to chat or stayed to surf the internet on our computer terminal after term of office. Never a dull moment.” 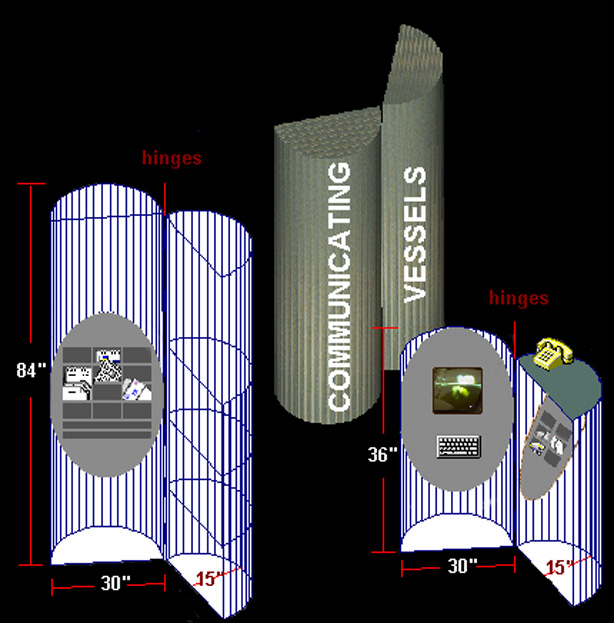 The kiosk provides visitors with computer access to a variety of amenities like New York's own HTML Pretzels (a binary delicacy), the Communicating Vessels website featuring VRML and RealAudio streams, digital postcards and Maptech Navigation Software, which locates vessels' coordinates and positions them on nautical charts. 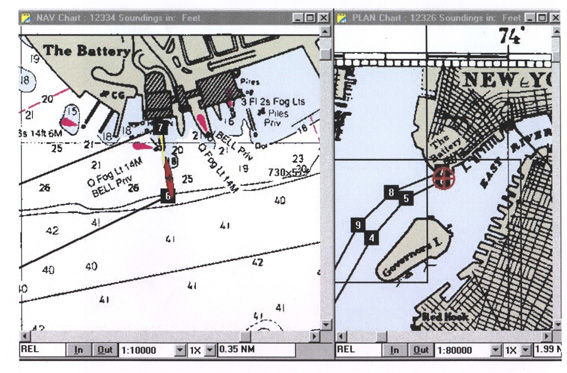 The interface of Maptech's Navigation software, showing the course of the S.I.ferry through Upper New York Bay

With Communicating Vessels, Schalks and Rocco attempt to integrate and enlarge visitors' awareness of the way things are connected in time and space. The visitor, in a sense, becomes another connective element, or vessel, between notions of what is past and what is present.