March 24, 1983. Jan Krommenhoek, Ies Noordhoek and I concluded our final exam at the Rotterdam art academy with an exhibition. The invitation card states that the three artists would enforce their claim to graduation with 'dingen'(things). 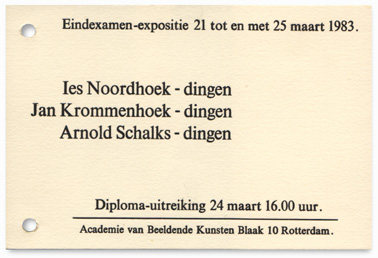 In 2006, the studio community Kunst en Complex, of which I'm a member, celebrated its 25th anniversary. Part of the festivities was an open studio tour through the foundation's factory building. 23 years from date, I conceived the plan to share my studio loft with the two fellow graduates of yesteryear.

It took some time to find out that Ies Noordhoek moved to Amsterdam and stopped making art a long time ago. Ies couldn't contribute artwork to the exhibition. Ies was represented by a name tag attached in the north corner of the loft.

Jan Krommenhoek was easier to trace. After his free fall from the academy's nest, Jan concentrated on a career as a visual artist. He worked hard and conscientious. However, after eight years of blood, sweat and tears, he came to the conclusion that he had aimed too high. He changed course, got retrained and started a job as a civil servant.

I met Jan in 2000 on his 40th birthday, lost in a crowd of elated colleagues. Everything seemed to be all right.

A little later Jan experienced the first signs of the disease that has ruined his life step by step. He was diagnosed to suffer from the most serious form of multiple sclerosis.

Today, after 6 years of physical demolition, Jan's fluttering right arm is the only limb that remained true to him. It represents his last connection with the outside world.

I invited Jan to participate in the exhibition. He agreed, knowing that his situation would not allow him to attend the opening.

THINGS II is an hommage to Jan's true right hand. His hand bridged the gap between his bed and my upstairs room, and settled in the form of paintings and drawings that furnish the wall of my loft.