A Do-It-Yourself Approach to Global Connecting

For some time Val Klassen, Administrative Coordinator at Video Pool and I were planning to start a media arts festival through the centre, but were stopped short by the idea of the immense amount of resources eaten up by a festival lasting four or five days. The average festival takes months of planning, meetings and money to pull off. We wanted to have fun, and to see work from other parts of the world without the immense commitment in energy and resources required for a "real" festival.

When I came back from Rotterdam, and told Val about Global Attic with its one night program, we felt it was the perfect solution.

In conjunction with Arnold Schalks and Noud Heerkens we started planning the second Global Attic Festival to take place simultaneously in Rotterdam and Winnipeg in June of 1997. The Second Global Attic incorporated several new elements which were scheduled at both locales: a simultaneous transnational humming performance, two curated packages of single screen works, and a showing of Wanda Koop's video installation 'See Everything See Nothing'. These exchanges fostered global connections that were symbolised by the hot air balloon at the first Global Attic. In Rotterdam the event took place in Arnold's attic and in Winnipeg it was held at the Underground Cafe and Ace Art gallery. Ace Art co-sponsored the event. 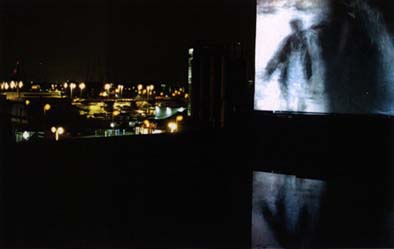 The works presented for the festival were selected by a curator from each city. Noud Heerkens curated the Rotterdam section and Gilles Hebert, the Winnipeg program. Heerkens is a filmmaker whose program was made up of works shot on film and video. Hebert's package was made up of works selected from Video Pool's collection and offered a range of styles in video making. The inclusion of Heerkens own 'What about Perversy in Winnipeg?' began the evening and set the pace for what was to follow.

The curators selected works speaking about geographic location and mediated cultures. For example in 'Dag Roelie' by Sander Blom and Mels van Zutphen, 'Maas Observation' by Greg Pope and Karel Doing, and 'Santosha' by Val Klassen, alias Video Val, we were presented with non-narrative meditations on geographic locale. Visual landscapes and aural soundscapes let me contemplate contemporary life in either place. Not all the works in these packages can be explained simply in terms of their similarities. Both curators offered us packages which were neither comprehensive nor representative contemporary cultural portraits of a place and time. Instead these programs allowed for a sense of Global connecting, whether imagined or authentic.

One unique part of this event was the transnational humming performance, in which I took part. This performance was one of a series of humming events conducted by Val Klassen and John Coutanche. For our festival, two choirs, one in Winnipeg and one in Rotterdam, performed simultaneously across the world "an inarticulate experiment" (Arnold's words). As we assembled in Winnipeg in the stairwell of Ace Art at 4:30 PM CST, our counterparts were gathered in Rotterdam at 10:30 GMT. Together, we hummed, creating a telephonic and telepathic link. Due to a last minute shortage of phone lines, the hummers didn't get to hear each other from their different locales at the time. It remained exciting, however, as the hope of suddenly being heard in another country was always present. When we finally received the tape from Holland, and it was mixed with our recorded performance by John Coutanche, it was as if we had been in the same room.

As I thought about this humming exchange, I felt that it was in some ways related to mail art projects that I have seen, and also to email and time based web projects. I could also see its relationship to other Video Pool one-off guerilla-style events, such as Van TV and Video Drive In.

The entire Global Attic Festival was a lot of fun. Watch for Global Attic 3, in which we hope to join with one or two more centres internationally, for more fun, cultural exchange, and humming experiments.